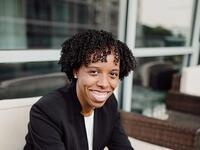 ALP speaker series: "Life, the Career, and Everything In-between"

Kalena Bovell, an orchestral conductor, poet, and educator, will present a talk titled “Life, the Career, and Everything In-between” at 5 p.m. Thursday, Nov. 18, via Zoom at umsystem.zoom.us/j/9553588256.

Panamanian American conductor Kalena Bovell, is not your typical classical musician and conductor. A self-proclaimed “Tattoo Loving Metalhead,” Bovell has been able to forge a career as the only Afro-Latina conductor in the United States. From working six jobs as an undergrad to a recent BBC Prom Debut, she will share her unorthodox journey and life as a conductor, poet, and educator.

For more information, contact the arts, languages, and philosophy department by phone at 573-341-4185 or by email at alp@mst.edu.