Due to public health concerns related to the COVID-19, many university-sponsored events are officially canceled until further notice. Many of these events are now being held via Zoom. Please contact the organizers of specific events for details. For updates regarding Missouri S&T and COVID-19, please visit coronavirus.mst.edu. 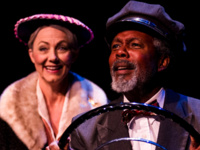 Alfred Uhry’s classic play is a timeless, funny, and hopeful meditation on race relations in America.  When 72-year-old Daisy Werthan, a Jewish widow living in midcentury Atlanta, is deemed too old to drive, her son hires Hoke Colburn, an African American man, to serve as her chauffeur.  What begins as a troubled and hostile pairing soon blossoms into a profound, life-altering friendship that transcends societal boundaries.

© 2020 - Curators of the University of Missouri | UM System | Privacy Policy
Missouri S&T is an equal opportunity/access/affirmative action/pro-disabled and veteran employer and does not discriminate on the basis of sex in our education
programs or activities, pursuant to Title IX and 34 CFR Part 106. For more information, see S&T's Nondiscrimination Policy or Equity and Title IX.