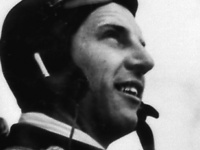 Join the Missouri Humanities and Missouri S&T for "George's Aunt Mildred," a performance by Kathleen Boswell.

A compelling account of a life lost too soon, the story of Army Air Corps Second Lieutenant George Whiteman is told from the perspective of his Aunt Mildred.

A native of Sedalia, Whiteman graduated high school at 15 and started college at Missouri S&T before joining the Army Air Corps in 1940. As part of the Air Corps, Whiteman achieved his lifelong dream of learning to fly. Whiteman was stationed at Hickam Base in Hawaii on December 7, 1941, when the plane he was piloting was shot down by Japanese gunfire. Whiteman is considered to be the first American pilot killed in World War II. His mother's comment to a local newspaper, "It can happen anywhere, anytime," has been adopted as the motto of the 340th bomber wing based at Whiteman Air Force Base, named for George Whiteman.