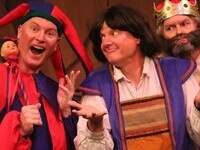 Before the Tragedy, there was… HAMLET’S BIG ADVENTURE!  From the guys that brought you such “(abridged)” classics as William Shakespeare’s Long Lost First Play (abridged) and The Ultimate Christmas Show (abridged) comes this fast, funny, physical extravaganza – a brand new theatrical treat!

In this hilarious (and completely fictional) prequel to Hamlet, nothing is rotten in the state of Denmark.  There’s laughter and joy and music and more laughter as teenage Hamlet leaps into action to save his beloved nunnery from closing.  Enlisting his good buds Ophelia and the jester Yorick, Hamlet and friends put on a show – what could possibly go wrong?  Along the way, Ophelia tries (and fails!) to pass her swim test and Hamlet must avoid his practical joker father, the King, who has a tendency to leap out from behind house plants pretending to be a ghost.  Meanwhile, Yorick teaches them about showbiz, comedy, and skull-juggling and they all wonder why Hamlet’s mother spends so much time at his uncle’s house!  If you like Shakespeare, you’ll like this show.  If you hate Shakespeare, you’ll love this show!

Reduced Shakespeare Company Mature Language Notification:  In the spirit of Shakespeare himself, RSC shows contain some occasional bawdy language and mild innuendo.  All children (and parents) are different, so we’ve chosen to rate our shows PG-13:  Pretty Good If You’re Thirteen.