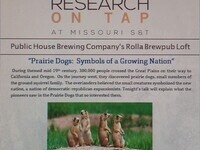 Short Blurb:  During the mid-19th century, 300,000 people crossed the Great Plains on their way to California and Oregon.  On the journey west, they discovered prairie dogs, small members of the ground squirrel family.  The overlanders believed the small creatures symbolized the new nation, a nation of democratic-republican expansionists.  Tonight’s talk will explain what the pioneers saw in the Prairie Dogs that so interested them.

Brief Biography: Diana L. Ahmad is a Curators’ Distinguished Teaching Professor.  She has taught at Missouri S&T since 2000.  Her Ph.D. is from the University of Missouri-Columbia and her M.A. and B.A. are from the University of Wisconsin-Milwaukee.  Before coming to S&T, she taught in Missouri, Texas, New York, Japan, Korea, Guam, and the Republic of the Marshall Islands.