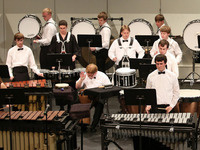 Missouri University of Science and Technology’s arts, languages, and philosophy department will present the annual “Performing Arts Student Showcase” on Thursday, March 7, at 7 p.m. in Leach Theatre of Castleman Hall, located at 10th and Main streets in Rolla.

The event will feature performances by students and community members involved in S&T’s performing arts program. A violin duet, the S&T Video Game Music Ensemble, the S&T Tuba/Euphonium Ensemble and students from the S&T theatre program will be among the performers.

Tickets are $5 for the public and free for Missouri S&T students with a valid ID and youth age 18 and younger. Tickets can be purchased 10 a.m. to 4 p.m. Monday through Friday from the Leach Theatre Box Office, located in the vestibule inside the main entrance to Leach Theatre, facing 10th Street. Tickets can also be purchased by calling 573-341-4219.

Tickets are $5 for the public and free for Missouri S&T students with a valid ID and youth age 18 and younger.