Due to public health concerns related to COVID-19, many university-sponsored events have been canceled until further notice. Many events are held remotely via Zoom. For updates regarding S&T and COVID-19, visit coronavirus.mst.edu. 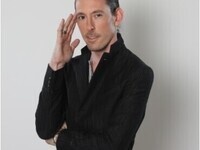 Multi-award winning performer Wayne Hoffman is recognized as one of the top mentalists in the world. Wayne's show is a high-energy presentation that involves body language, human behavior, and visual magic that will make your head explode. The audience experiences seemingly supernatural phenomena in a fun, upbeat way.

Wayne continues to be acknowledged as one of the top speakers in his field and wows audiences with his combination  of magic and psychology.  He was featured on this season of "America's Got Talent," as well as multiple other television appearances. Wayne has performed for thousands of audiences in some of the most elite venues across the world.

Presented by the Missouri S&T Student Union Board in collaboration with Leach Theatre.

© 2020 - Curators of the University of Missouri | UM System | Privacy Policy | Terminalfour
Missouri S&T is an equal opportunity/access/affirmative action/pro-disabled and veteran employer and does not discriminate on the basis of sex in our education programs or activities, pursuant to Title IX and 34 CFR Part 106. For more information, see S&T's Nondiscrimination Policy or Equity and Title IX.